SFContario Coming Up Once More!

Another convention! When am I ever NOT attending one?

Well, most of the year, actually. Spring and Fall are con seasons for me, and there won't be another until Ad Astra in 2015. That's ok, though. I could use a break. And the time to prepare my next book, Apoca-Lynn, for launch!

Back to SFContario. I have a reading scheduled, and a few panels to do, too. I have three days to prepare before the con begins. Better get cracking!

To answer my own question from my last post about why I was watching Agents of Shield earlier this evening, there it is - I have a panel on that show, and I need to get my studying in.

Yes, watching TV is studying. Not necessarily goofing off, not at all. Shut up.
Posted by Timothy Carter at 7:53 PM No comments:

The Best Title One Could Hope To Come Up With

I started writing this at the end of my 3rd week at my latest temp job. Naturally there was a cup of Tim Horton's steeped tea next to me as I put pen to paper. The week has gone well, and it's great to be earning money again.

Writing has also been picking up. The end is in sight for I, Suicide, and new projects are coming together in my head. I'll be posting a new short story here soon. It's a bit of an experiment, with no fantasy elements at all! I know. I'm scared, too.

It is now Tuesday night of my 4th week at work. Still going well, I'm glad to say. I went to a friend's birthday party on the weekend, and I'm very glad I did. Socializing is good for me. I made a new friend!

Right now I'm watching Marvel's Agents of Shield. Good show. And I need to study it. Why? Stay tuned...
Posted by Timothy Carter at 7:03 PM No comments: 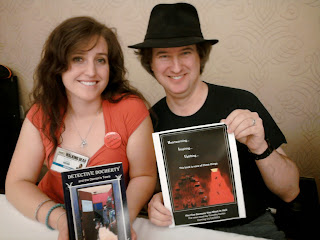 This is the con that, to my mind, gets everything right. Not that other cons get everything wrong (or even most things wrong), but GenreCon has nailed it for me two years running.

First of all, it's just awesome to be asked to be a pro panelist. Second, they have far fewer hoops for me to jump through to get into the con programming. A couple of other cons have started inviting me now, and they are getting better at making the process of being a panelist less of a chore. They still have a way to go, though, before they are as friendly as GenreCon has been for me.

This year I wasn't at all sure I would make it. Finances have been bad, and I did not want to incur any further debt in order to attend. I tried raising money with a Facebook event, asking people to buy The Five Demons You Meet In Hell so I could use those funds to offset the costs. I raised about $100 this way, and got another $100 from my parents. The con staff helped me out, too - I shared a room with three of them, and got a ride to and from Guelph. 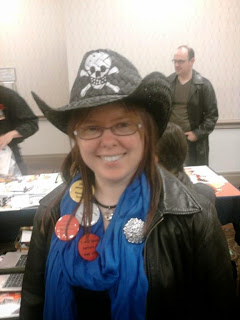 My friend and fellow author Elizabeth Mary Ann Hirst (pictured here) gave me a place to sleep Saturday night, reducing my expenses even further. I am so grateful to know such good people, and proud to call them friends.

Incidentally, Elizabeth was at the con to launch her new novel, Distant Early Warning. Click here to check it out!

I did two panels Friday night, four on Sunday, and so many on Saturday I lost count. I talked about writing, favourite books, Spider-Man, Star Wars, etc. I even joined in with a Disney sing-a-long, and got rave reviews for my rendition of Randy Newman's You Got A Friend In Me from Toy Story. Turns out I imitate him pretty well!

I was introduced to Burger Priest. They are good, but I have yet to be convinced they are better than Hero Burger. And they are not open on Sundays. :( Not cool, Burger Priest!

I sat in on some interesting panels, too, including the one about Doctor Who head writer Stephen Moffat, and the one on Orphan Black even though I've never seen the show. My good friend, fellow author and cover artist Sarah Water Raven led a panel about the joys of Tumblr, another social media platform I am slowly working my way into. We hung out and drank mead Friday night. Woo-hoo!

One panel that caught me completely off-guard was the fanfiction panel An Unconventional Ship. I figured ship meant space ship. It did not. The actual definition, in fanfic context, is adult subject matter that cannot be discussed here in this sentence. For a proper definition of shipping, please see the next paragraph.

It's about sexy boinking sex! Shipping is writing a story in which two characters from a show, comic book, anime or basically any kind of media property get together and get it awn! The only rule seems to be that you shouldn't ship two characters who are already doing it on the show/in the comic/etc. I haven't written any... well, there was that one Merlin story I did. But other than that I haven't shipped at all. Fortunately I have friends who read (and write) a lot of it, so I was able to contribute something to the discussion.

Of course, being a convention, there was only so much time I could spend with so many people I wanted to see. There were a few friends I didn't get to hang out with at all, and others I'd say a quick hello to while running back and forth between panels. 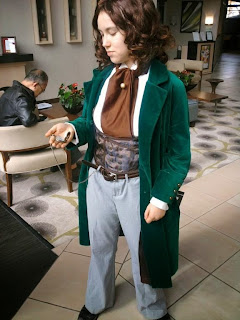 A few friends I didn't recognize at first, including the guy who turned up in a Princess Leia golden bikini. It was a while before I remembered we'd done two panels together at GenreCon last year! I didn't snap a picture of him, so here's a photo of an 8th Doctor cosplayer instead.

Incidentally, the golden bikini was the subject of a panel about the depiction of women in Star Wars. I wasn't scheduled to be on that panel, but a fellow panel invited me to participate. I'm glad he did; it was an important discussion.

I did a reading from 5 Demons... for one person. Jen Frankel, the author reading immediately before me, did slightly better - she had two people in attendance! One of whom was me. Author readings... there's something we need to jazz up for next year, GenreCon! 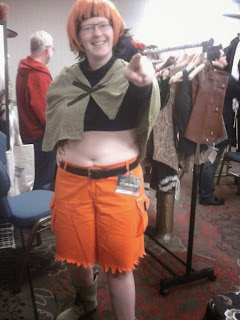 I made a few new friends, including the woman in this picture who was cosplaying a Pokemon character. I didn't know the character, I didn't catch her name, and I thought she looked like a sexier version of Bam-Bam from The Flintstones. Thus, I named her Sexy Bam-Bam. I'm clever that way.

I also met a couple who had a lot to say about Section K. Was all my stuff that... intense? Foul-mouthed? Generally unpleasant? Nope, Howard Plank & Johnny Tall are not for everyone. It was good to get that kind of feedback, though. They certainly weren't rude about it. Section K simply wasn't what they were expecting, given that I'm mainly a YA author.

Back home, the usual post-con depression sank its claws deep into my soul. Fortunately, a case of con-flu did not come with it. GenreCon was fantastic fun, just like the last one. I hope that when next year's con comes, I'll have a new book to launch and/or promote.

I'd better get busy.
Posted by Timothy Carter at 12:12 PM No comments:

A lot has happened since I last sat down to post. For one, I've given up soft drinks. Cherry Coke, Pepsi Twist, Doctor Pepper, Orange Crush, 7-Up... all are off my menu, and I'm a little bit healthier. Yay, me. Good god I miss them.

I've been to two conventions in the last few weeks, with another coming up this month. I'll blog about them separately, just as soon as I kick my ass to do it. In short, they were fun, they were wonderful, and they were learning experiences as well. Socially speaking, I'm still struggling. At least, I feel that way.

My depression has been more manageable lately. It helps that I'm currently employed; money is less of a stress. I've landed another data entry position at a bank, and it should run until the end of February.

I'm 90% through the first draft of I, Suicide, my spinoff novel from The Cupid War. I've been at it for three years now, and it's quite a different beast from my usual output. I'll be glad to see it finished.

The Five Demons You Meet In Hell is, in my view, a failure. It was a good first foray into digital self-publishing, and I've been told the vast majority of ebooks sell even worse due to authors being unknown to the masses. That was nice to hear, but 32 sales is still terrible. Nevertheless, I am going ahead with Apoca-Lynn. Glutton for punishment, am I? Maybe. But not ready to give up yet, either. I'm also going to re-launch Closets.

That's where I'm at right now. Blogging hasn't been easy, but I'm making an effort to get back to it. I still have a lot more to say.
Posted by Timothy Carter at 5:22 PM No comments: