There's another review of EVIL? out on the web! This one comes courtesy of Speculating Canada, and can be found here.

The review, written by new best friend Derek Newman-Stille, focuses on the anti-bullying aspects of the book. This is amusing to me, because anti-bullying hadn't been foremost in my mind when I wrote it. Indeed, I'd been given a directive from my editors to write about something other than the kid who gets picked on; anti-bullying had been a very strong theme in Attack of the Intergalactic Soul Hunters, and a minor theme in Epoch, and they felt I needed to 'grow as a writer'. Stuart is the victim of bullying, however. It may have been brought on by supernaturally-enhanced religious zeal, but it's still bullying. Turns out I did write another book about the picked-on kid! I'm grateful to Derek for noticing and pointing that aspect out. It's a theme I'm not done with, not by a long shot.

Since this post is about EVIL?, let me take a moment to remind everyone about the short story sequel I wrote, Walk of Evil, which can be found here. 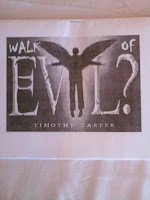 If you haven't already checked it out, please do so immediately!

Posted by Timothy Carter at 7:42 AM No comments:

And now for Sunday, the second half of my SFContario experience. Although it wasn't really half the experience - I had only two events, compared to the five I did the day before. Nevertheless, it was a very full and rewarding day!

My first event was the Writing in the Digital Age panel in Ballroom BC, with fellow panelists James Bambury, Lynna Merrill, and my new best friend Sarah Water Raven (seen here stuffing a pen up her nose). 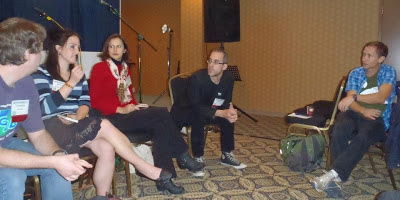 The panel started at 10 in the AM, which is a problem to anyone who understands the Sunday schedule of the TTC. Basically, the trains don't start running until 9:00 AM, with very little service before that (including my local bus!). From the time the first bus of the day picked me up, I had about 45 minutes to get to the panel on time! And somewhere in there, I had to squeeze in another cup of tea, too! Once more I was extremely grateful for that Tim Hortons inside Finch Station.

I got to the Ramada Plaza Hotel in decent time (read: not too late), but I still had to find Ballroom BC. See, the rooms in that hotel were tricky to find without a strong sense of irony. After all, the Gardenview had no view of a garden, the Courtyard wasn't anywhere near an actual courtyard, and the Solarium had no sun. The name Ballroom BC suggests a very large dancing room with a stone-age theme, so I knew I to look for a small room with lots of tech lying around. And that's pretty much what I found!

The panel itself was insightful and fun. I got a chance to gripe about how I had to learn Internet marketing by trial and error, and the others spoke about what had worked for them. I learned some good tips about ebook publishing, for which I am grateful to my co-panelists.

Afterward, I visited the con-suite with Sarah the pen-sniffer and her minion, Keli. It really is terrific for authors and other panelists to have a place to go and relax with a snack and a drink in-between our scheduled bits of programming. Having had a table at most other cons, I would often return to said table instead of taking advantage of the con-suitey goodness on offer. My lack of a table this time meant I sold fewer books, but I had the chance to unwind in the company of some awesome people. And Keli the minion bought a copy of Section K from me, so it was awesomeness all around (thank you, Keli!).

My last bit of official programming was a book signing, located in the Hallway. Which hallway was the Hallway? That's what I had to find out with all speed. Luckily I received directions, and was delighted to discover that the Hallway was, in fact, a hallway! No irony in that designation at all. I shared a table with Violette Malan and two other authors whose names I really should have written down (sorry, guys!). The Hallway was empty, with nobody for us to sign books for. It looked to be a very dull and depressing hour...

...but then my friend Rebecca Lovatt arrived with brownie cookies and chocolate chip & cookie dough muffins! And there was much rejoicing. Nom, nom, nom!!! Words cannot describe how awesome Rebecca's baked goods are, so I won't waste any trying. No books were sold or signed, but boy were we well-fed! Nom, nom, I say again, nom!

The signing ended, the muffins were woofed, and one last bit of business for me remained. My friend and fellow author Ira Nayman (Alternate Reality Ain't What It Used To Be) had requested a copy of my first published novel, Attack of the Intergalactic Soul Hunters. Who was I to day no? He is probably the last person on Earth to have purchased a copy... at least until I sell it to another publisher!

I left that day feeling grand. SFContario had been good to me, and I definitely plan to return next year. 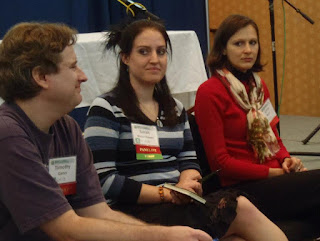 Posted by Timothy Carter at 9:11 PM No comments: 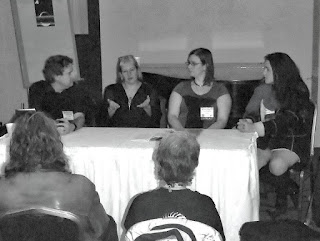 But I was far from passive at last weekend's convention, ever so conveniently located(for me, anyway) in the heart of downtown Toronto. I turned up bright and early on Saturday morning at the Ramada Plaza Hotel, ready to do my half-hour reading, three panels and Kaffeeklatsch(which I still can't pronounce). My reading at 11 was poorly attended, but two wonderful people did turn up midway through to hear me read from The Cupid War. Suzanne Church came in for the next reading, and she was just terrific. She read a story in which Death orders breakfast at a diner before going to Niagara Falls. All three of us were hooked, hanging on her every word. Then she ended her reading without finishing the story, which can only be seen as an intolerable act of cruelty. >:( Shame on you, Suzanne Church, for writing such a compelling story!

I went from the readings straight into my first panel, Urban Fantasy. Joining me were fellow authors Violette Malan, Michael Mattheson, Shirley Meier. Turns out I was the moderator! That's not something you want to find out at the last minute! I'm happy to report that I rose to the occasion; I thought up some decent questions to ask my fellow panelists, and kept things running smoothly.

The Kaffeeklatsch was a non-event. I hung out in the room with my good friend Mike Bryant for half an hour, then we left to go have lunch. I had the blandest bowl of beef and barley soup I have ever eaten; not gross, just kinda ho-hum. Glad I brought my own sandwich.

At 4 o'clock it was time for revenge. And guilt. Scheduled to appear with me on the Vengeance and Guilt as Motivation panel were Herb Kauderer, Michael Mattheson, Gareth McGorman, Tony Pi, Caitlin Sweet. And yet, I seem to remember only four people on that panel, including me. I can't say exactly who was missing... I should've taken names at the door! Anyhoo, the panel went well...ish. I got a little muddled while trying to make a point about heroic behaviour vs. vengeance. Overall, though, it was okay. Not feeling vengeful. Maybe a little guilty.

My final bit of programming for Saturday was SF and Gender, with Kathryn Allan, Shirley Meier and Sarah Water Raven. I was a tiny bit late, having left the con to grab a burger and do some writing. Ten minutes can only stretch so far! I spoke once again about James Alan Gardner's Commitment Hour. And that's about all the speaking I was able to get in! It felt a bit like the others were hogging the conversation, but that's only because they were so very enthusiastic about the subjectmatter. The panel covered a lot of ground, and managed to be completely different from the similar panel I did at Can*Con (except for me talking about Commitment Hour, which is a fabulous book).

Sarah Water Raven had come to promote her new novel, Detective Docherty and the Demon's Tears, and SFContario was her first con! She and I hit it off, and I wasted no time making fun of her main character's last name. Y'know, Docherty. Doche-rty? Douche-bag? Well, I thought it was funny...

I think I'll stop here for now, and make a new post for Sunday. Until then!
Posted by Timothy Carter at 7:26 PM 3 comments: 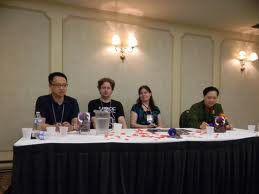 Next weekend I will be attending SFContario at the Ramada Plaza Hotel on 300 Jarvis St. It won't be that far of a walk from College Subway Station; for once, I'll be attending a con that is really, really easy to get to by TTC!

I have no programming on the Friday, but Saturday looks to be quite busy. Here is my schedule in brief:

I also have a book signing session on Sunday at Noon.

Just what is an Kaffeeklatsch? I had to ask about that.

Apparently it is some sort of round table discussion between myself and approximately 20 people on... anything. I suppose I'll talk about my areas of expertise: writing, blogging, conventions, Transformers, Doctor Who, being unemployed, freaky religious stuff, mental health, and tea.

This will be my last con of 2012 (or ever, depending on what happens on December 21st!), so I plan to have as much fun as possible. It will be a long stretch before my next one, Ad Astra 2013.

Posted by Timothy Carter at 7:33 PM No comments: